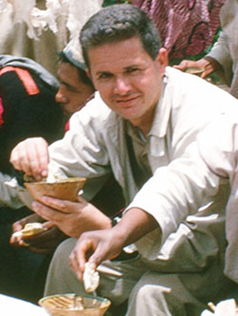 Dr. Early began his career as a Jesuit priest, although he resigned from the priesthood in 1969. As a member of the Harvard-Chiapas Research Project, he went to Zinacantán to study Maya worldview and its Catholic elements. Later, his interest turned to demographic research as a planning basis for the literacy, cooperative, and health programs among the Maya in Guatemala. His research was intended to bring national and international attention to the severe malnutrition and high mortality among the Maya which was primarily a result of social injustice. This interest then turned into fulltime research on the evolution of human population dynamics: for hunter-gathering groups as exemplified by the Agta in the Philippines, for tribal groups as exemplified by the Yanomami in Brazil, and for peasants as exemplified by the Maya in Mexico and Guatemala. After publishing four books on population dynamics, he returned to his original interest in his two latest books-religious worldviews and their moral implications for the implementation of social justice.

Dr. Early is a prolific writer who turned much of his research into journal articles and books. He has had over 25 works published, including such well-received books as: The Demographic Structure and Evolution of a Peasant System: The Guatemalan Population (1982); The Population Dynamics of a Philippine Rain Forest People: The San Ildefonso Agta (1998); The Xilixana Yanomami of the Amazon (2000) and Maya and Catholic Cultures in Crisis (2012). Two of his books have been translated into Spanish for wider international circulation.

For an introduction to Dr. Early's collection please see the hard drive located in box 30 item 1, please read An Introduction and The Anthropologist. Dr. Early welcomes and invites you to use his faculty papers collection: "Welcome to Florida Atlantic's Collection of my research materials. Over the years as they piled up in my den, little did I think anyone would be interested in preserving them. But here they are in their original rather untidy and not well explained condition. If someone wishes to look into these materials, I suggest they begin by reading this memorandum in which I attempt to give a brief orientation to my research as well as the following memorandum in this folder that describes in greater detail the digitized materials. If someone is looking for something specific in the collection, these memorandums might save them sometime or help explain some of the materials. Some materials, especially slides and movies, exist both in their original physical form and digitized form."